James and Donna are two characters who get a lot of heat from fans, mostly for their naivete; but that naivete may have been a saving force in the series. They certainly have a lot of scenes that are rather difficult to defend (such as James leaving Donna alone in the woods after hearing that there is a murderer still on the loose, who just killed their friend), but it is necessary to remember, when considering James and Donna, that they are the absolute archetype of the young and naive, who believe love will solve everything, and who behave selfishly without realizing it. While some find these characteristics to be irksome, I believe, ultimately, it helped with creating the overall ethos of Twin Peaks, which we all love so much. Without a little light in the darkness, the atmosphere of Twin Peaks would be too oppressive: That is why it was so important to have small points of light peppered throughout the darkness, including the offbeat humor, Cooper’s strict morality, and the little bits of tender sweetness displayed by the characters. 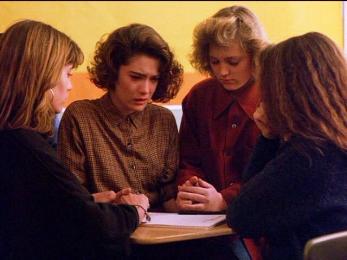 Donna, inconsolable after hearing of Laura’s death, with a circle of comforters.

Out of all the characters, Donna and James, along with Mr and Mrs Palmer, are probably the most devastated by the loss of Laura, and their grief moves them to the conviction that, as the only ones who really loved Laura, they are the only ones who can properly investigate her murder. This conviction can be attributed to the belief that love can and will solve everything. It is important to note that this is how the characters start out, and the progression of their arc is affected by the way this conviction is slowly destroyed through the course of the series, as more and more horrible things come to light, and James and Donna must face that their love cannot save their world.

Donna and James are a representation of what the town of Twin Peaks is at its heart, and what it stands to lose if Cooper does not save it from BOB. They represent innocence, naivete, and love. Both make many bad and rash decisions, but that is characteristic of being young and inexperienced. Their love story was purposely schmaltzy and over-the-top because it had so much darkness and brutality to balance out. I also took it as a bit of a parody of the over-the-top drama of teen exploitation classic Rebel Without a Cause.

”Donna was a small sad, dull, boring, routine and comatose,” says Lara Flynn. ”But there’s a lot of glow underneath. She’s one of those girls who took her teenage years a small bit too seriously. Everything Donna does is unequivocally urgent. It’s life or death. Like Natalie Wood in Splendor in a Grass.”

James Dean and Natalie Wood in “Rebel Without a Cause.”

Natalie Wood and Warren Beatty in Splendor in the Grass, a tale of teenage heartbreak.

James was not necessarily your classic “James Dean – Rebel Without a Cause,” nor was Donna his Natalie Wood to a T, but both were obviously built off of these classic, stereotypical roles: The Bad Boy Biker, and the Good Girl in Love Gone Bad. James slowly becomes disillusioned with his home town and eventually drives away, while Donna becomes more and more distrustful as the boy she loves leaves her, and she finds out her parents have been lying to her. Their characters fit into the neo-noir/neo-50s style that David Lynch is so fond of, and their character progression reflects the way the town itself is slipping from innocence as this dark force begins to corrupt it.

James and Donna with Maddy (dressed as Laura)

When Maddy starts to “come between them,” it is another symbol of the corrupting force of evil dwelling within the town, which is turning Maddy into Laura to cause strife, and eventually kills her before she can escape. Maddy’s arrival also stirs up feelings of jealousy in Donna, who unconsciously starts to see her as Laura, and thus as someone who could steal James away from her. In her desperation to keep James, Donna begins to try and act more like Laura — almost as if she is trying to “Out-Laura” Maddy. The consequence is oddly humorous, especially as a woman who has done something very similar and equally as foolish. People like to exasperatedly look down on her character for this arc, but it always served as one of my favorite Donna story-lines, as it represents a phase that many young women have gone through during the desperation of young love.

James and Donna also keep us tied to Laura, who is arguably the main character of Twin Peaks, or at least the beginning and the end of its story. More importantly, James and Donna keep us connected to the Light side of Laura, the part of her that was innocent and longed to do good, and to be loved and helped. Characters like Jacques, Ben Horne, Blackie, Leo and BOB remind us of the Dark side of Laura, all the secrets she kept, all the reprehensible things she got into and that eventually killed her. If Twin Peaks was only the story of a bad girl who was murdered as a consequence of being lewd or doing drugs, it would be depressing, and rather shallow. However, when you also pay mind to the sweet and loving side of Laura, the side that Donna knew best, the side that James loved, the story becomes more compelling, and more of a debate not about what is good and what is bad, and not a tale of punishment for perceived wrongdoings, but a story that delves deep into human nature, and the constant battle in our psyches between our light (public) selves and our dark (secret) selves.

What makes us who we are? Is it how we act when no one is there to tell us not to? Or the way we act when we are moved by the presence of our loved ones? The answer is, both, and more. Everything we do makes up who we are as a whole, and Twin Peaks is a work that brilliantly investigates this identity crisis, and the striving for wholeness.

When Twin Peaks was prematurely curtailed in 1991, James was out exploring the world and perhaps discovering the light again for himself, while Donna was facing more of the harsh darkness of the truth, learning that her real father is the despicable business man Benjamin Horne, whom her mother was having an affair with. Donna’s father, enraged, shoves Ben, who falls and hits his head. Afterwards, we see Doc Hayward tending to the injured Cooper, and not in jail for murder, which is a good indication that Ben is probably still alive. However, what this means for the future of the Haywards is debatable. The last we see of Donna, she is screaming hysterically, halfway out the door to leave her family home. Was Donna going to find James? Would she stay in Twin Peaks, or would she go on travels of her own? Would she end up getting back together with Mike? Hopefully we will get some answers soon…